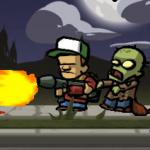 Build! Defend! Survive! - This is what the fun-addicting game Zombs .io is all about! The main goal of this free zombie io game abcya3 is to gain as much gold as possible and live as long as possible. Before you can start collecting gold, you have to gather some simpler resources like wood and stone. After you gathered enough of these both resources, you can place a gold stash, which establishes your base and holds all of your gold and then you can start generating gold with the gold mines. It is safe in the day time, but when it becomes darker you have to fight and protect your base from hordes of evil zombies. Placing different weapons, towers and traps around your base will help you to save all your gold mines.

To build a solid fort you need a lot of wood and stone, so don't forget to collect them during the abcya 3 game. Another important thing that Zombs io player must keep in mind - always improve your defense, because every next wave of hungry zombies will be harder to survive than the previous one. To increase your chances to win, you can team with your friends and build a big base together. In the game shop you can buy new weapons and thus become stronger. First you start playing, you may think this is a MooMoo .io clone. The graphics and the main concept of both IO games are very similar, so if you played Moomooio it won't be difficult for you to orient yourself in the game.

If you are a fan of arcade games, don't miss out on the chance to play some games at https://abcya-3.com like Ovar.io and ZombieCraft.io

To move your character in Zombs IO you have to use WASD keys and MOUSE to look around. To gather, build and attack press the left mouse button, for auto attack press SPACE. Upgrade quick with E key, heal your character with F, B to enter the shop menu and P for party menu. In Zombsio players can also communicate, just press ENTER to start chatting.