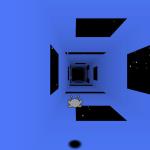 Run, skate, float, bounce, and/or jump your way through even more space tunnels! Don’t worry if they fall apart on you, repairing them is someone else’s job.

Run 3 is an incredibly addicting, endless runner-type action/platforming free abcya game in which you play as a little grey alien. The little alien is trespassing in an architecturally challenged area that is floating in space. After trespassing in the prohibited zone which is full of increasing amounts of dangerous holes, you run. If you fall into one of the holes, you will find yourself lost in space so make sure to watch your step!

Let's face it, running is a real drag. Nothing's worse than running around in circles in hopes of burning a few calories.

But with Run 3, the only sweat you might see is from your palms as you run and job through crazy obstacles in an alien setting where the laws of physics don't always apply! Why run in circles when you can run through a track that places more and more deadly holes in your way as you progress? Plus, this abcya online game is set in outer space, which beats the park or the gym any day!

If you would like to try a similar game, give Slope a try!

Controls: Use the spacebar or the up arrow key to help your character jump over black holes.