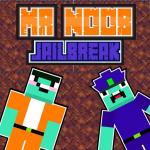 Have fun with this entertaining new game Mr Noob jailbreak is an adventure game on ABCya 3th games and many other noob games. A courageous young newbie tried to get out of jail, race across the rooftops of the buildings, and attempt to go as far as he could, but he came across numerous guards and potential adversaries that would kill you if you don't respond swiftly. Control the tiny noob's motions to get as far as possible with the greatest score. Jump, fire, and utilize slow motion to enhance your aim. Have fun with this free casual game and many more.

Save the game on your favorites and relax list if you really want to experience those challenges. We also suggest giving players the same games for you to explore after every hour of work or learning the same stress with this game like Pixel Smash Duel. Are you ready for your new challenge?

We also bring to the world of interesting players of similar games with this minecraft game like Supernoob Prison Easter. Are you ready for this new journey?

Adventure game, action and shooting. Casual jump and shoot game Minecraft based game You can play it on PC, Tablets and mobiles.

Mr Noob jailbreak is created by TapTapking.com. Play their other game on ABCy-3.com: Poppy Dungeons

Right-click to fire, W to leap, S to slide, and spacebar to activate slowmotion. Use the touch game buttons on mobile devices and tablets.