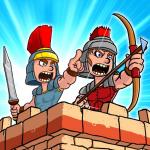 Become a part of Empire Rush: Rome Wars...Epic Castle Defense! Have fun with one of the finest conquering games! Fight the most difficult fights with strategy. Participate in a flurry of conflicts to establish the age's great empire. If you enjoy Tower Defense (TD), Conquest games, and Collectible Cards, Empire Rush: Rome Wars combines these elements and takes you on an epic journey to rule the globe! CRUMBLE THE HORDE! Rome is the most powerful empire of the era, growing through the strength of Caesar and his troops, but it is now under assault by barbarian hordes seeking to depose Caesar.

Establish your defensive base by first fortifying walls and troops - Try to combine distinct heroes - Finally, fortify your tower and magic to confront the conquest battle - The greater the tower level, the harder the magic. Every time he utilizes magic, there is a hero who uses the talent. Using three different types of spells makes it easier to defend. Magic of repair: Restoring the health of the wall Magic Bomb: The use of magic bombs to attack opponents. Ice storm: Slowing down blizzard-smashed creatures.

Share with your friends when you experience the Empire Rush Rome Wars Tower Defense. Besides, you also can play more with a list of games such as Gravity Running at ABCya 3. You will find interesting adventure games like this action games. Much fun!

Use the mouse to play.