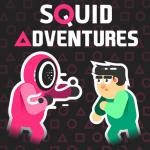 Play and have fun in this new action game and adventure based on the Squid Adventures game from ABCya3 free games. The authors of the game Squid Adventures decided not to spend time on trifles and compiled practically all of the tests that the Squid game participants went through in one game. Six rounds of tests await you, the first of which is extremely known to you: Red and Green Lantern. You must reach the girl's robot while stopping in time at the lantern's signal.

The second round is a dexterity test in which you must carve a very delicate figure out of a dalgona sweet while holding a needle. The third option is tug of war, and the name says it all.

Fourth, there are marble balls. Heavy balls must be thrown into the yellow circle. The fifth obstacle is a glass bridge that you must traverse while remembering the placement of the safety tiles to avoid falling through. The sixth and final round is a square game. To get to the square field, you must run faster than your opponent.

Besides, we also suggest giving players a lot of other action games similar to this special game like Shooter Craft. You have joined and topped the chart. What is the best class of players today?

Don't forget to expand your game world with countless squid games today like Squiden Shoot Game. A new way of playing will help you win this world.

Squid Adventures was developed by New Kids Games. Play their other game on ABCy-3.com:

Use mouse on desktop or touch on your mobile device.