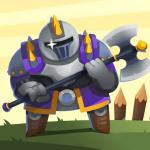 Have fun with this entertaining game of battle, towerdefense, arena, strategy and much more Heroes Towers is a new exclusive game from ABCya 3 Games. Construct a fortified tower, equip it with the most powerful crossbows and cannons, and repel the attacking forces! All conflicts are fought against other players. Protect your tower from attacks, or collaborate with an ally to attack other people's towers. Increase your rating and gain new rankings. Earn fantastic goodies by completing achievements.

Share the list of the most favorite game you've ever played with lots of interesting games similar to this game like ArmedForces.io. Choose your challenges and you can overcome all the challenges.

We also suggest giving players strategy games that you have the opportunity to update in your free time similar to this game like Noise Of Bones. You will discover the best things that every game brings.

- easy to start - pvp-mode with 3 players on the battlefield - cute 2d graphics.

Heroes Towers was developed by PERSONA•GAMES. This is their first game on ABCy-3.com!

Click on the selected platform and choose the desired element to create or enhance a tower element. You'll need coins to develop and enhance, which you may obtain by killing other players. To put your tower to the test, hit the DEFEND button. Two opponents will be chosen, and their forces will assault your tower. To assault other players' towers, you'll need heroes, which may be recruited and improved for cash.