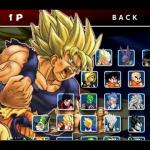 Dragon Ball Fierce Fighting V2.6 is a Fighting game that you can play here on abcya 3 online. Have you ever dreamed of becoming a hero in Japanese animation stories? It is an attractive battle between talented heroes and monsters in a comic world. Become a great hero with many special abilities to destroy the enemy.

Jump into Dragon Ball Fierce Fighting V2.6 free game at abcya 3 games and show off your talent right away! The evil dragons are trying to attack and destroy the world of mankind. Use your talent and special abilities to stop this destruction. Choose a character that you love, use your punch and kill all the beasts and enemies on the battlefield. You have to punch continuously until the enemy falls to the ground and runs out of energy.

It is time for you to fight with the challenge! With simple graphics, the attractive gameplay, this game will bring you many great things in life. Keep your eyes to observe in every direction, because enemies can appear everywhere in different contexts.

Play more with some similar games such as Real Fighting. Check out the collection at http://abcya-3.com.

Use the WASD to control your character.