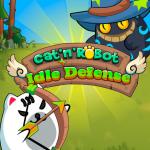 Have fun with this entertaining action game CatRobot Idle TD Battle Cat is an exclusive game of the tower defense category in ABCya grade 3. This is an online version of the popular Google Play game, except your kingdom has been overrun by monsters. Make your warrior cats stronger, and construct the largest robot to combat border enemies. You will undoubtedly become engrossed in those epic fights in this simple tower defense game that requires only one touch to play.

The goal of the game is to upgrade your tower in order to defeat the numerous foes that appear in each level with increased power and new villains and bosses. Aim and fire quickly to destroy opponents before they reach your tower!!!

We also suggest giving players new games that you have the opportunity to update in your free time similar to this game like Speedrun Platformer. You will discover the best things that every game brings.

PC controls: Use the mouse to aim and left click to shoot the arrows.

Mobile and Tablet Controls: Tap on the screen and move to shoot the arrows.